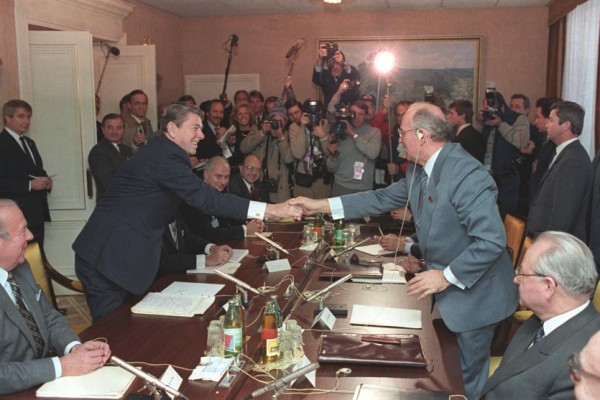 This handshake, between President Reagan and Soviet leader Mikhail Gorbachev, signified the first meeting between US and USSR heads of state in six years. Scheduled to meet for 15 minutes at the Geneva Summit, Reagan and Gorbachev ended up speaking for substantially longer, and later braved the language barrier without translators in a truly private second conversation. Though the summit ended in the signing of an agreement stipulating that each side would reduce their nuclear arsenals by fifty percent, the two parties continued to disagree on the United States' Strategic Defense Initiative, "Star Wars." 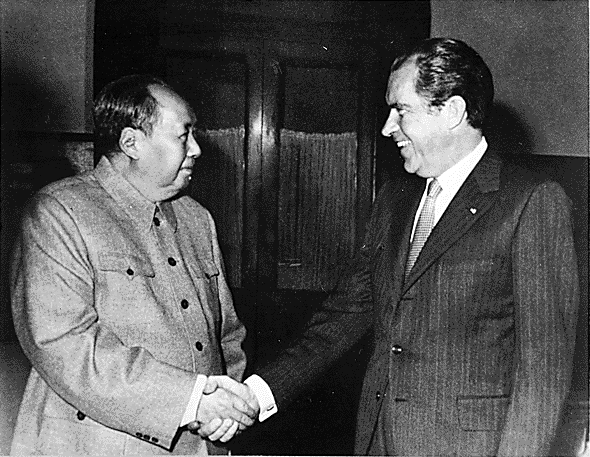 President Richard Nixon and his wife traveled in a landmark visit to the People's Republic of China in February 1972. The trip would begin a new period of Chinese-American relations. Nixon's visit was a strategic maneuver made after relations between the West and the Communist East were gradually changing. China had publicly disagreed and split from the Soviet Union. Nixon used this confrontation, which was peaking in the early 1970s, to make a visit that would stun the world.

The picture of Richard Nixon, a virulent anti-Communist since his time as a Congressman during the Alger Hiss case, shaking hands with the leader of Communist China was one most never imagined they would see. The handshake was of particular importance to Nixon as he was told that John Foster Dulles's decision not to shake hands with Zhou Enlai had left him insulted. Nixon wanted the visit to be a picturesque message sent around the world, preferring cameramen to reporters covering the event. 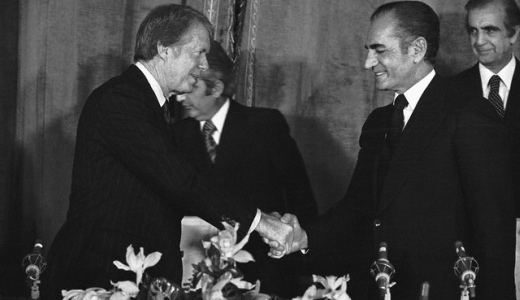 After their first meeting in Washington, D.C. on November 15th, 1977, President Carter and the then embattled Shah of Iran, Shah Mohammad Reza Pahlavi, were reunited in Tehran on New Year's Eve. Seven days earlier the shah had announced the implementation of special tribunals to those detained on charges of corruption. The move was seen as a key concession to opponents who demanded the right to a people's court. At their November 15th meeting, Carter had declared the shah as "an island of stability". These words would come back to haunt Carter when Pahlavi was overthrown by Islamic Fundamentalists in early 1979 and Iran was taken over by the regime of Ayatollah Khomeini.

Pahlavi came back to the U.S. for cancer treatment in October, provoking radical Iranian students to charge and take over the U.S. embassy in Tehran on November 4, 1979. Sixty-six Americans were taken hostage, and the ensuing 444-day period of crisis lowered the public's confidence in Carter's administration and contributed to his eventual loss to Ronald Reagan in 1980 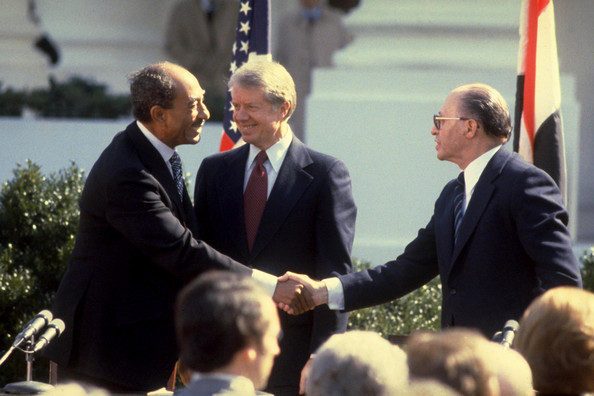 Following the September 1978 Camp David Accords, which were also overseen by President Carter, Israeli Prime Minister Menachem Begin and Egyptian President Anwar Sadat joined once again in the spring of the following year. Their handshake signified an agreement on the peace treaty resulting from the Accords, which stipulated that Egypt would recognize Israel's statehood while Israel would withdraw its occupying forces from the Sinai peninsula.

Though both leaders were awarded the Nobel Peace Prize for their work on the treaty later that year, progress towards reconciliation proved to be short-lived, as Sadat was assassinated in retaliation by an extremist contingent of the Egyptian army in 1981. Still, by the end of 1982, Israel's forces had in fact vacated the peninsula as the treaty mandated. 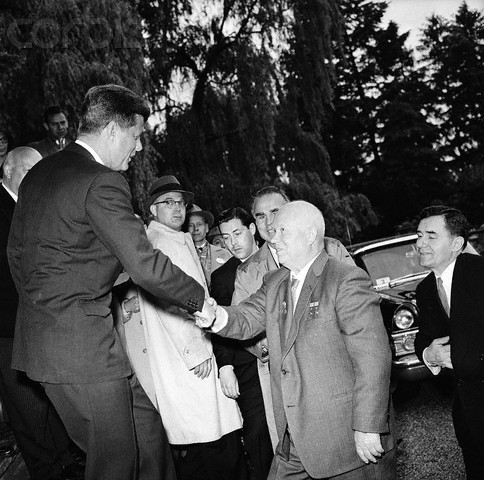 Though the handshake pictured here may seem benign, the series of events triggered by this meeting of President Kennedy and then-Soviet leader Nikita Khrushchev at the Vienna Summit was nearly disastrous. At the time, tension was mounting over the divide in Berlin between communist-controlled East Germany and capitalist-democratic West Germany, and Khrushchev's threats at the Summit to sign a separate peace treaty with East Germany added fuel to the fire.Later that summer, Kennedy would go on to say that the United States needed to be prepared to defend its rights in West Berlin, and only weeks later, at Khrushchev's command, the building of the Berlin Wall commenced.In the year that followed, relations between the US and the USSR became more strained, as both sides tested nuclear weapons, culminating in the Cuban Missile Crisis of October 1962. 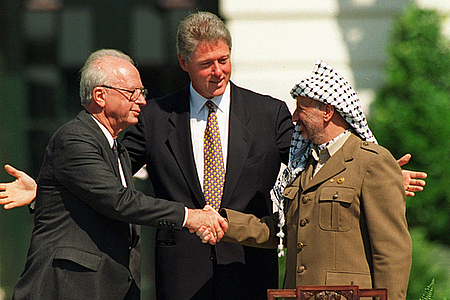 Pictured here in Washington, D.C., Israeli Prime Minister Yitzhak Rabin and Palestinian leader Yasser Arafat shook hands to signify their agreement on a Declaration of Principles, resulting from the Oslo Peace Accords, that would mandate Israel's removal of its troops from the Gaza Strip and West Bank territories. Not long afterwards, Arafat's exile was lifted and he returned to Palestine.Arafat and Rabin, along with Israeli Foreign Minister Shimon Peres, were later awarded the Nobel peace prize for their efforts in the negotiations. Slightly more than a year later, Rabin would be assassinated by an extremist who had founded an illegal Jewish settlement on the West Bank. 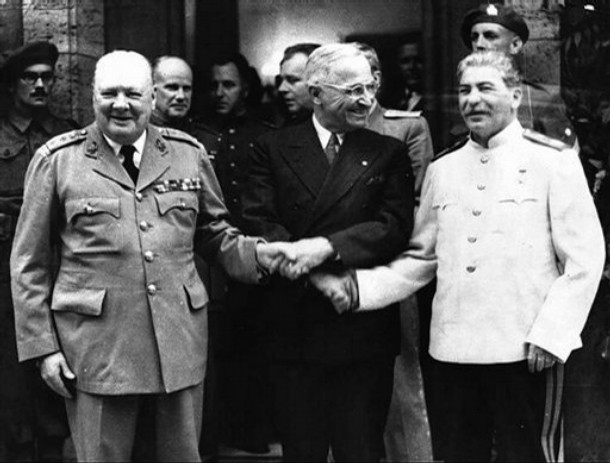 The Soviet Union's Communist Party General Secretary Joseph Stalin, British Prime Minister Winston Churchill, and U.S. President Harry Truman met at the Potsdam Conference in Potsdam, Germany from July 16 to August 2, 1945. The purpose of the meeting, and the public show of alliance by handshake as seen above, was to decide how to proceed in the wake of Nazi Germany's collapse. The Nazis had agreed to unconditional surrender on May 8 (V-E Day).At the time, the Soviet Union controlled most of Central and Eastern Europe. Truman was a relative newcomer as President of the United States as President Roosevelt had died just months before in April. Truman was also seen as more strongly anti-Communist than his predecessor. The three leaders' handshake in Germany was a display to the world that, for the time being, all three countries were united in restructuring a post-Nazi Europe. 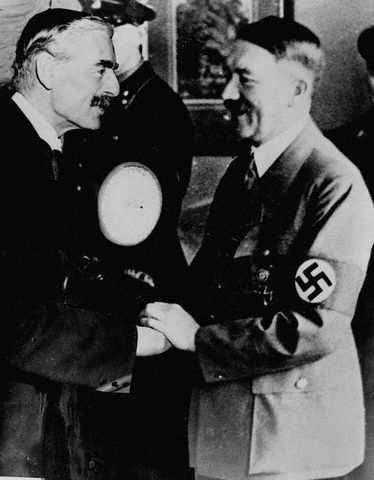 September 22, 1938German ruler Adolf Hitler met and shook hands with British Prime Minister Neville Chamberlain in Godesberg, Germany on September 22, 1938; eight days before Chamberlain's famous arrival in Britain claiming peace with the dictator. The purpose of the meeting was to debate Hitler's takeover of Czechoslovakia's Sudetenland. Chamberlain believed that Hitler was only concerned with the Sudetenland and believed war could be averted.Chamberlain arrived on the 22nd to give his terms for peace but was roundly rejeceted by Hitler who claimed they had become unacceptable. Hitler clearly sought to gain the offensive in the negotiations by not only rejecting Chamberlain's peace plan but insisting that Sudetenland be surrendered to Germany within the next six days. The Munich Agreement brought about by the French and British and also signed by France and Italy allowed German annexation of Sudetenland. 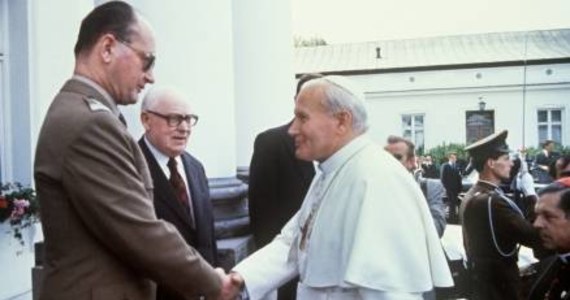 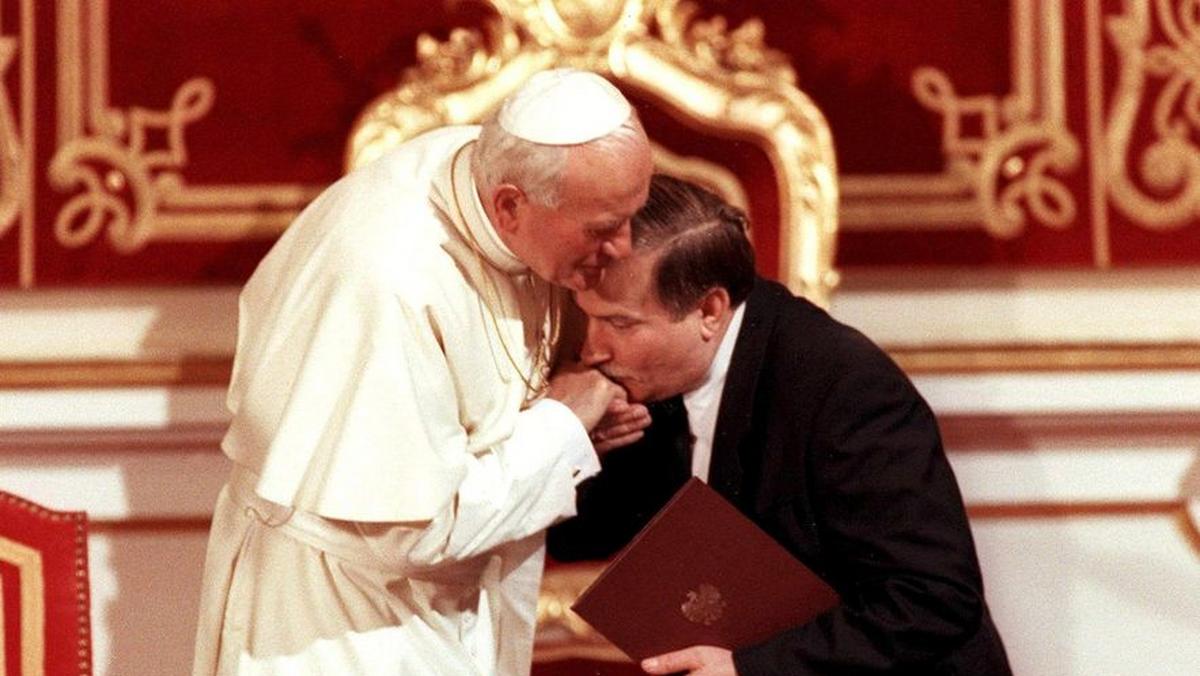 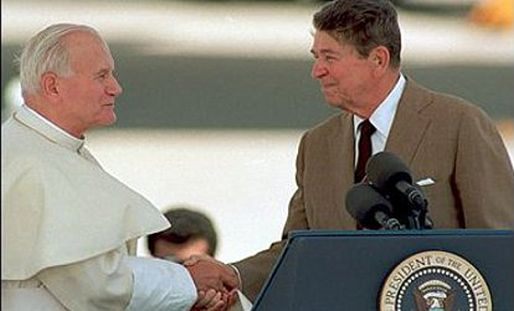 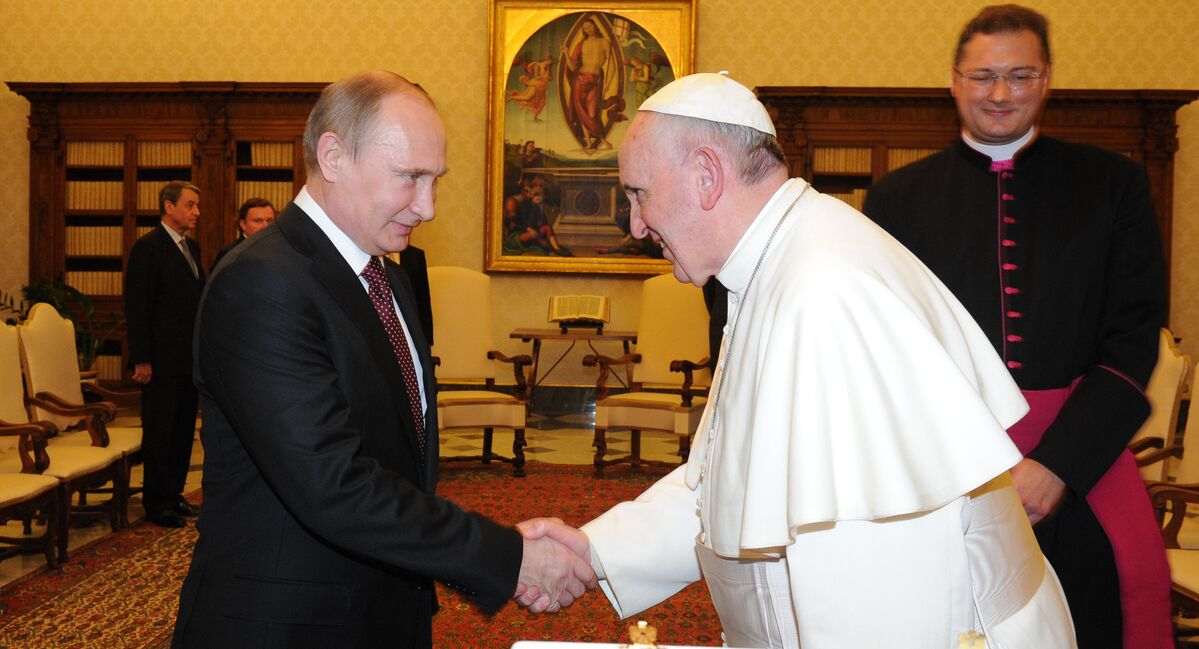 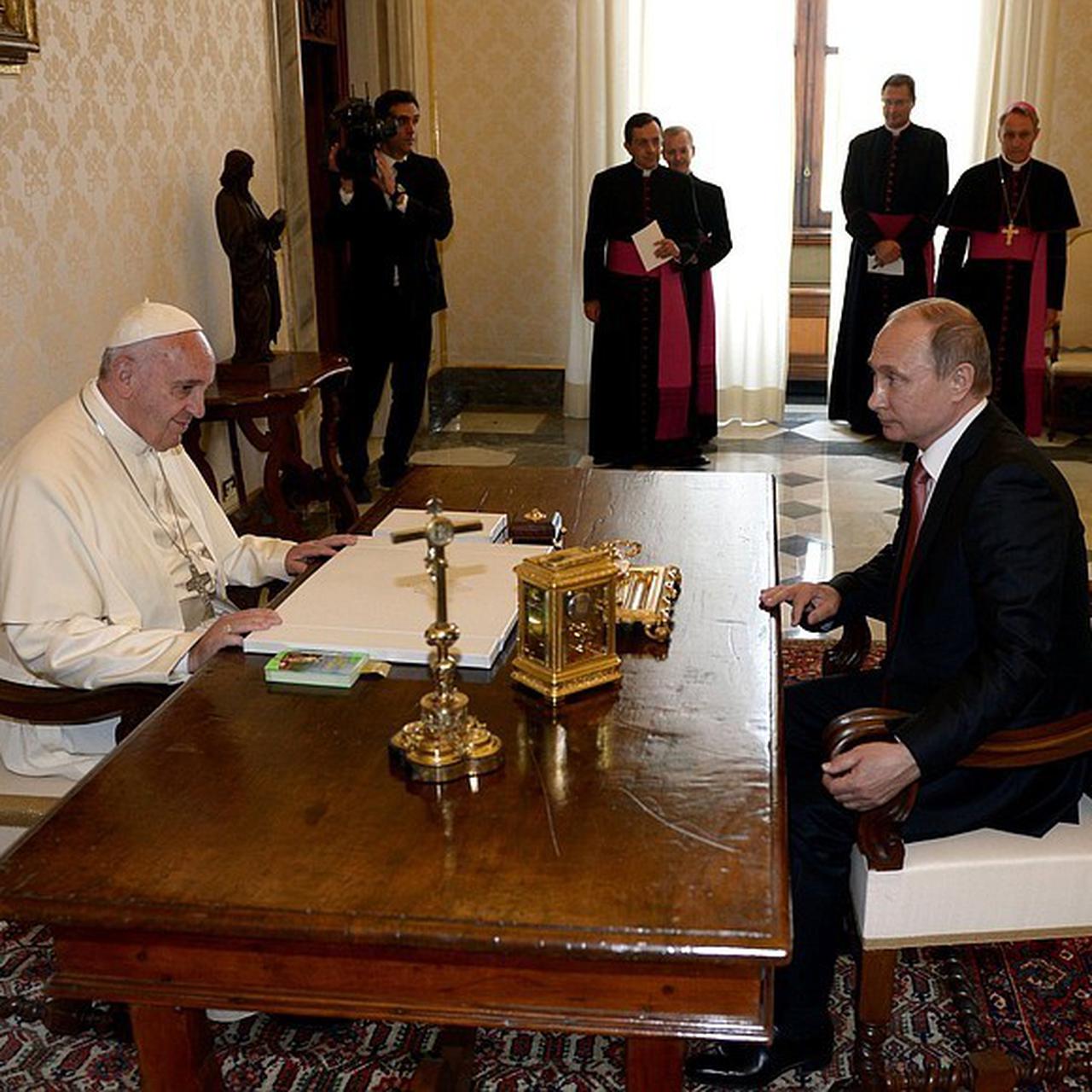